Ingestion of silver nanoparticles leads to changes in blood parameters

Objective(s):
The silver nanoparticles, being very small size, can permeate the cellular membrane and interfere in the cell’s natural process. In the present study, the effects of time, the dosage of these particles and their use on blood molecules and hormones, the volume of drinking water, and the urine parameters were analyzed.
Materials and Methods:
Thirty six rats of the Wistar race, as subjects, were divided into six groups (one control group: C and five test groups: T1-T5). In the test groups, drinking water was replaced by the Nanosilver (NS) solution with concentrations of 5, 20, 35, 65, 95ppm. After three and six months, three rats were chosen randomly from each group, and their blood was collected.  Various blood parameters were measured instantly, and the results were processed by one-way analyses of variance and Tukey's test.

Results:
The animal’s uptake of water increased significantly in parallel with the increasing of the particles’ concentration. Ketone bodies were noticed to be present in the urine of the female rats received high doses of the particles. The level of T4 decreased considerably (p<0.05) in parallel with the time and the concentration of the received particles. Depending on the dosage, and the time of use, blood testosterone increased, and the level of blood cortisol decreased. The observed effects were more evident in the proceedings with the concentration of 35ppm. 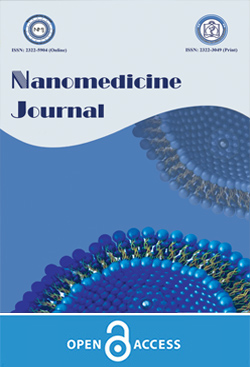